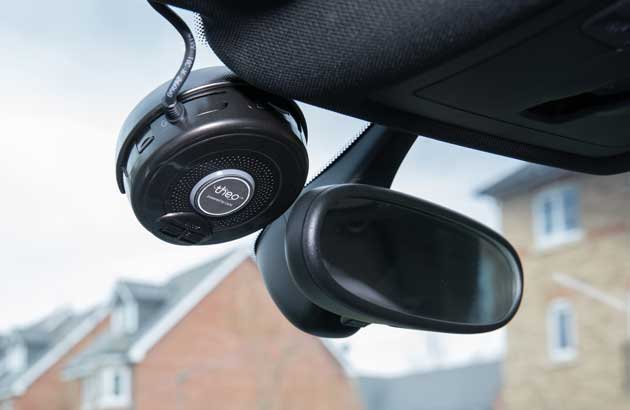 ThingCo's Theo device is self-installed by drivers, who apply it to their windscreen using an adhesive strip (Credit: ThingCo)

The deal between the two companies comes alongside news that the brokerage – founded by serial entrepreneur Sam White – will release a usage-based insurance proposition powered by telematics called Freedom to Drive this week.

Sam White, CEO of Freedom Brokers parent firm Freedom Group, said: “Well before the pandemic, we were in discussions with ThingCo to launch a telematics proposition that was distinct from anything else on the market.

“Little did we know we were well ahead of the curve. The last few months have demonstrated the need to provide more personalised cover based on actual usage and behaviour.”

Motor insurance firms were put under pressure to return premiums to drivers during the UK’s period of strict Covid-19 lockdown measures, as driving fewer miles led many to question the value of their policy.

In turn, pay-per-use insurers, such as By Miles, saw increased interest in their products, and veterans like Brockman – who founded insurethebox, one of the first telematics-based propositions in the marketplace – began to predict a change in consumer attitudes he believes will make drivers open to usage-based insurance products.

As opposed to ThingCo’s business-to-consumer offering – in which users can demonstrate safe driving behaviour to leverage a panel of insurers on price – the business-to-business opportunity taken up by Freedom Brokers will provide the broker and its underwriting partner with the data needed to price each policy based on driver usage.

Customers of the brokerage will also have access to ThingCo’s reward system through its app, allowing them to unlock discounts and freebies from third-party retailers such as Amazon, Just Eat and Dominoes.

As well as detecting potential impacts and giving vocal warnings to aid in collision avoidance, ThingCo claims its Theo device can automatically recognise when drivers have had an accident.

Once drivers have vocally confirmed that they’ve had a collision, ThingCo’s accident and emergency centre organises for the relevant emergency services to attend the scene.

This initial interaction serves as the First Notification of Loss (FNOL) in each insurance claim, which White hopes, along with the safety management features, will give her brand an edge as some predict the move towards usage-based insurance.

“Theo fits perfectly with our promise to provide straightforward, uncomplicated insurance with a first-class claims service,” she said.

“It will be easy for customers to install, the data quality is on par with professionally installed devices, and through voice we can offer a lot more than conventional telematics propositions to make customers feel safe and engaged in our brand.

“Equally, it gives us a fantastic level of insight to help manage risk and expedite claims from the point of impact.

“We are always proud to do things differently at Freedom and the launch of Freedom to Drive, supported by Theo, will really set us apart at a time when the interest in usage-based insurance has perhaps never been higher.”