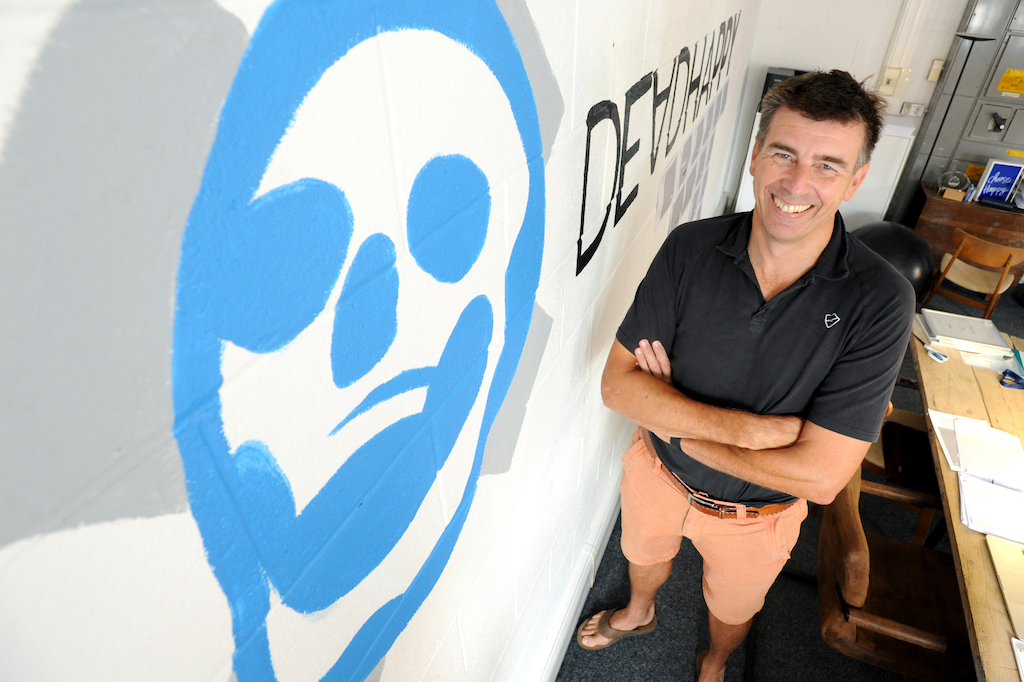 Dead Happy is one of several brands trying to change the dull perception of life insurance in the UK, but its CEO’s own brush with death makes for a uniquely personal founding story. Phil Zeidler explains to NS Insurance’s Peter Littlejohns why he’s passionate about expanding access to life insurance and how his company uses humour to break the ice.

In a 1789 letter to 18th Century French physicist Jean-Baptiste Le Roy, United States founding father Benjamin Franklin remarked that “in this world nothing can be said to be certain, except death and taxes”.

Of course, he wasn’t the first to make the observation, and since that letter the phrase has been repeated many times as a jaunty poke at the impermanence of life.

But the industry built around protecting one’s nearest and dearest once they’ve shuffled off this mortal coil doesn’t see the lighter side of mortality.

“You can’t use the D word, that’s far too controversial,” says Phil Zeidler, mimicking the apprehensive reaction some within life insurance have had to his very frank approach to selling coverage.

“It’s bizarre that despite the fact people are far happier talking openly about other previously taboo topics – like sex, drugs, race or LGBT issues – death is still an uncomfortable topic, even though it’s the only thing that’s going to happen to all of us.”

Zeidler is CEO of Dead Happy, one of a number of life insurance companies attempting to change the way people think about insuring for the inevitable.

One approach the company takes is not to mince its words, something wholly apparent in the marketing tagline “life insurance to die for”.

This straight-talking attitude has been received well by many, reflected by a laundry list of positive TrustPilot reviews as well as the company’s Net Promoter Score (NPS) of over 90.

But not everyone is on board with the lighter approach to death, with Zeidler even having to defend an advert banned by the UK Advertising Standards Authority (ASA) last year, after a complaint was lodged with the view that it trivialised suicide.

At the time, he expressed frustration over what he saw as the misunderstanding of a marketing campaign based on bizarre and surreal imagery, and a dive into his past reveals he has very little cause to trivialise death, let alone suicide.

Although Dead Happy attempts to make light of mortality to take away the stigma attached to death, few people know that the emotional impact it can have is something only too real for its co-founder.

“Fifteen years ago, I nearly died,” he says.

“I was very seriously ill in an ITU (intensive treatment unit) with an overwhelming infection that had caused sepsis.

“My wife is a doctor, so she was aware that they’d done everything they could and it was just fingers crossed time.”

Luckily, Zeidler pulled through, but with an 18-month old baby and a four-year-old child at the time, he couldn’t help but contemplate what would have happened had his body failed to recover.

He had life insurance, but began to think about just how bad the outcome of his passing would be if he was one of the 8.5 million primary earners – a statistic released by the Association of British Insurers in 2016 – who don’t.

“If the circumstances had been different and I had been in that situation, not only would my family have lost a husband and father, but they’d also be told ‘by the way, financially you’re buggered’.

“That’s what those 8.5 million people risk, and that’s what drives us.”

Death is neither seen nor heard

One of the reasons Zeidler gives to explain why such a large number of UK citizens are without life insurance is the lack of exposure many have to death.

Death, he says, doesn’t happen around people as it did in the Victorian era when an unsophisticated knowledge of medicine and healthy living meant high child-mortality rates and low life expectancy for adults.

“If you ask a room of 100 people how many of them have actually seen a dead body, it would be very few.

“Death is medicalised. It’s in a hospital in which people go to die. It’s not seen and so it’s not at the front of people’s minds.

Zeidler’s statistics come from an analysis of ONS mortality data, which also shows women fare better, with 12% dying before this age.

But with these stats equating to one in five males and one in eight females dying before they reach retirement age, the case for buying life insurance is convincing.

Life insurance is sold, not bought

Zeidler believes another reason 8.5 million Brits with dependants go uninsured is that the process prospective customers must go through to obtain coverage is anything but user-friendly.

He explains: “There’s this theory that life insurance is sold, not bought.

“Life insurers always start with an industry perspective, asking people how much coverage they want.

“It’s because, at the heart of it, insurance is always product-focused, they’re not thinking about the customer first.

“But it’s a bizarre question, because how do people know what coverage they want?”

Another barrier, he says, is that the sale of almost all life insurance policies involves speaking to somebody directly, and at times requires a medical examination in person.

He adds: “It’s complex, it’s full of jargon, it takes a hell of a long time and it’s really dull.

“Is it any surprise that more than eight and a half million people don’t bother?”

In order to address these issues with its own proposition, Dead Happy changes the question from how much coverage a customer may want, to “what do you want to happen when you die?”

That question led to the company creating Deathwishes – a system that incorporates a range of death-benefit outcomes beyond paying off the deceased’s mortgage.

Zeidler previously spoke to NS Insurance about how part of the reason for pursuing this idea came from the lack of utility life insurance has for younger consumers,

But another innovation Dead Happy brought to market is its candid attitude towards death, something he says is important for reaching the right customers.

With its Dia de los Muertos (Day of the Dead) aesthetic and viral cartoon series Mick and Tel, Dead Happy’s website is unlike any brand the life insurance industry has seen – but Zeidler says it’s important to inject some humour into the process.

Life insurance, he believes, is typically marketed by soliciting fear or using “bizarre images that don’t really mean anything.”

One standout example of the latter is the young woman synonymous with the Scottish Widows brand, who is often seen in adverts traversing rural landscapes in a long cloak that wouldn’t look out of place at a meeting of the occult.

By contrast, Dead Happy’s adverts depict two middle-aged men, Mick and Tel, with the former touting the benefits of its coverage.

Meanwhile, the latter expresses disdain for the company’s “disrespectful” straight-talking approach and scepticism about its less invasive approach to underwriting, in one scene referring to the company as “cowboys” for offering a quote after asking “only four questions”.

These arguments are a metaphor for the real-life concerns of those opposed to Dead Happy’s approach, but Zeidler says the company embraces that reality.

He explains: “Humour is one of the most powerful ways of dealing with difficult topics.

“We use it deliberately to break into those conversations, and that’s something people get.

“We recognise that we’re not going to be a brand for everyone, and that’s fine.

“What we are always going to be is straightforward and transparent.”

Dead Happy has lofty ambitions for the life insurance market

Outside of the humour lies an ambitious desire to grow Dead Happy into what Zeidler calls a “death ecosystem”, with “digital wills” one prospective addition to a business he hopes will become the go-to place for anything death related.

The company also recently released “Near Death” – its critical illness insurance product – and has been scouting out territories outside of the UK, with the US the most likely for it to enter due to “very substantial interest” in its proposition.

“I’ve been around this block a few times before and we’re not here to build a niche UK business,” Zeidler concludes.