The ABI and BIBA have renewed their advice to motorists looking to travel abroad, letting them know they'll need a Green Card to validate their car insurance if a Brexit deal isn't agreed. 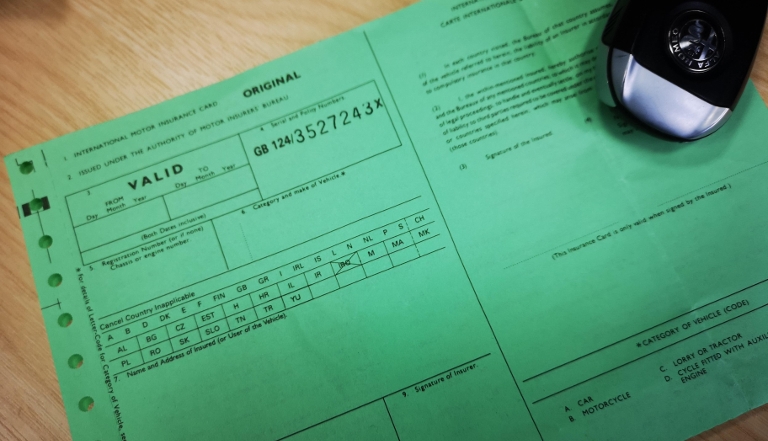 Insurance companies are handing out Green Cards to drivers travelling within the EU, in preparation for a possible no-deal Brexit outcome (Credit: Johnstone Insurance)

More than half of UK motorists are unaware they’ll need a so-called Green Card as proof of car insurance if the country leaves the EU without a deal, according to new research.

Awareness was higher among over-65s, (59%), but just 20% 18 to 24-year-olds were appraised of the situation — something the ABI believes could be down to the fact that Green Cards were commonly used to confirm car insurance until the early 1980s.

BIBA executive director Graeme Trudgill said that if the country leaves the EU without a withdrawal agreement, UK drivers lose the benefit of driving in the Free Circulation  Zone — any area within European Economic Arena countries — without vehicle insurance checks.

“If the UK is not allowed in the Free Circulation Zone then UK motorists will have to produce what is known as a Green Card; a hard copy document evidencing valid motor insurance, printed on green paper,” he added.

“Since the 2016 referendum BIBA has raised with Government the difficulties of reverting to a Green Card system and the additional bureaucracy that drivers will have to face.

“This research confirms what we suspect – those driving to Europe will be caught unawares.”

The survey was carried out among 2,000 UK adults.

The ABI and BIBA have been raising awareness to drivers looking to travel to an EU country since January this year, when it was uncertain whether the country would leave the bloc on March 29.

With the general public now unsure whether the date of departure will be October 31, as the standing government intends, the two organisations are once again spreading awareness of the need for a Green Card to validate car insurance abroad.

The ABI was also keen to remind motorists that the Free Circulation Zone includes both Northern Ireland and the Republic of Ireland.

Director of regulation Hugh Savill said: “Insurers have issued over 400,000 Green Cards to customers and, together with insurance brokers, have been busy alerting motorists to what they need to do if driving their vehicle in the EU.

“As things currently stand, all drivers planning to take their vehicle to the EU after 31 October should, if they have not already done so, contact their motor insurer to arrange for a Green Card in good time for their trip.”

Insurers reacted to the customer need for Green Cards back in March, fearing that the UK wouldn’t extend the Brexit deadline.

Since then, many have set up portals on their websites for policyholders to request a card.

Allianz is one such insurer, and Chief underwriting officer Neil Clutterbuck said: “Awareness of the need for a Green Card is as crucial for the commercial world as it is for private motorists.

“We have developed an automated solution which we switched on in March. This online portal means cards can be emailed or posted to the broker or direct to their client if requested.

“As the document needs to be printed on green paper however, we anticipate that postal will most likely be the preferred option.

“The portal will ensure a smooth transition in a time of uncertainty and should make the additional administration for brokers a simple and quick process. We have already issued over 2500 cards and are anticipating many more requests as the 31st approaches”