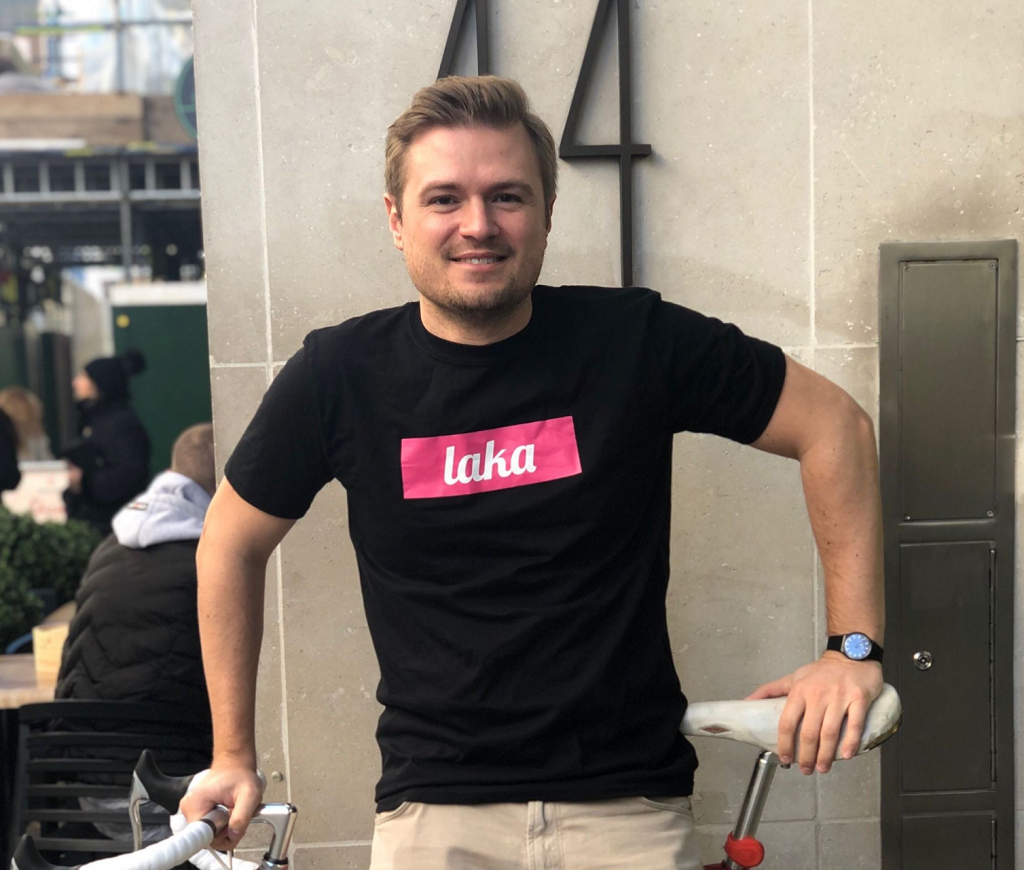 Laka is a London-based insurtech that started its business to insure the UK’s bikes with a different approach to traditional insurers — but the start-up has grand ambitions to move into the Southeast Asian market, starting this year. CEO Tobias Taupitz tells Peter Littlejohns about Laka’s journey in insurance and the reason for the major pivot ahead.

The traditional insurance business model has been around for centuries and it doesn’t look to be going away anytime soon — but that doesn’t mean every player in the market has accepted it as the best way of doing business.

London-based start-up Laka was founded by three individuals who questioned whether one of the world’s oldest business models does enough to serve customers.

The idea started with CEO Tobias Taupitz, a German-born former corporate finance specialist, who spent his early career at management consultancy KPMG before moving on to the mergers and acquisition department at Barclays, where he spent his time working with fintechs and insurance companies.

He says: “I covered fintech and insurance at the same time and it was a very positive experience for me, because one day I would see all of the funky new stuff, and the next day I’d see all of the boring traditional stuff in insurance.

“But at some point, these two worlds would come together and start asking exciting questions like ‘why is it done like that? It doesn’t make sense’.

“With fintech you see every vertical being challenged in financial services, except for insurance — this makes you think ‘why has insurance not changed? Was it because we accidentally chose the best business model outright, decades and centuries ago? Or is there just nobody there to challenge it?

“The assumption I made quickly was that it is the latter.”

Laka has received £1.35m ($1.63m) in investment since its launch, and currently has a team of 15 people  in the UK split between its London headquarters and an office in Bristol, where the tech team operates.

Far from having a love of the insurance industry, the reason Taupitz dipped his toe into it early in his life was his father.

“Conveniently, my dad is actually to blame for all of this,” he explains.

“He’s an insurance broker in Germany where I grew up, so we had conversations about the industry around the dinner table ever since the early days.

“I went off to do an apprenticeship with an insurance company and studied how insurance businesses operate, along with actuarial sciences, in Cologne.

“I then ran as far away from it as I could.”

After moving away from insurance because it was “very boring and stale”, Taupitz started what would be a three-year career in corporate finance.

Laka was founded in 2017 by Taupitz, along with chief product officer Jens Hartwig and chief technology officer Ben Allen — but the three didn’t know each other long before taking this step.

They met just before enrolling in the Startupbootcamp insurtech accelerator programme in 2016.

“The programme started in January 2017, which was also the time we formerly set up Laka, and got accepted into the FCA sandbox, which allowed us to find the right regulatory framework.”

As well as rebranding the business from the original name “Insure A Thing” to Laka, the three were forced to pivot their business model slightly due to regulatory rules.

“We went into Startupbootcamp saying we were a cash-flow negative business model, where we pay out claims first and collect the money later,” says Taupitz.

“But that made us look much more like a consumer finance entity than an insurance company, and there were questions around how we’d make that work for Laka from a regulatory perspective.

“We settled on being a type of insurance intermediary called a managing general agent because a consumer finance business cannot adopt a stop-loss policy, and we want to cap customer premiums.

“We basically wanted to take two parts of the rulebook — consumer finance and insurance — but annoyingly, those two can’t overlap because they have different rulebooks.”

Taupitz hasn’t given up on the idea of adding consumer finance into Laka’s proposition, however, and hopes that regulatory changes will allow it to become a reality in the future.

“When the customer really trusts you looking after their most favourite activity, why just insure their bike and not go into other areas, like financing it?,” he asks.

Through the accelerator programme, Laka crossed paths with Swiss insurance giant Zurich, which was intrigued enough by the start-up’s proposition that it became an underwriting partner.

“It only takes one person at the right level, with the right ambition and interest to make this work, and we were quite fortunate that we found this person at Zurich to help us figure things out,” says Taupitz.

“When we first talked to Zurich, we didn’t know what the framework was for us, and that one person was just the tip of the iceberg — behind them were teams in complaints, compliance, authorisation, marketing etc. All of them had to sign-off on the deal.”

In order to get Zurich fully on board, Taupitz went to an actuarial consultancy to figure out where to set the stop-loss for customers, but one advantage Laka has in working with the Swiss giant is that no actuarial calculations need to be done to calculate premiums.

“Laka is incredibly simple, we don’t need an underwriting criteria because we pay the claims throughout the month, add the bill up and split the cost among our customers – there’s no actuarial science from the bottom up.

“The only difficulty was establishing that stop-loss, because we had very little data points to begin with.”

Another attractive quality Taupitz believes helped the start-up get Zurich on board was its low-risk profile.

He explains: “What clearly helped is that we have a niche product with limited risk.

“If we ever hit that stop-loss, it might be that five bikes more get damaged than planned, and that means £10,000 or £15,000 additional losses – we’re not talking about millions of pounds that could spill over.

“Whereas Zurich traditionally provides underwriting capacity to insurtech Managing General Agents , we pay fees to them based on the stop-loss and claims float we use to cover claims.

“This is far away from the underwriting profit and underwriting income that’s under pressure these days, and ever eroding because of price comparison websites.”

Taupitz says that after operating Laka’s business model since 2017, the start-up has recorded twice as many claims as it expected, but at roughly half the expected value — meaning its losses are roughly what were expected.

Laka has two main segments of customers — millennials and “middle aged men and women in Lycra”.

Millennials have different expectations of Laka than their older peers, who Taupitz says are “slightly better risks” to insure because they tend not to take as much risk while riding.

He says: “When millennials have a claim, they’ll file it on the Monday morning after their crash happened on Sunday and say to us ‘hey, I need to be back on the saddle by Saturday for my next ride — can you settle my claim in the next two days?’”

“We’ll obviously try, but if you think about the way traditional insurers work, this could take anything from two to four weeks.

“It’s really interesting how the expectations have changed, but on average we agree a claim within a day and settle within seven — it can be less, depending on manufacturers having the right parts immediately.”

Laka has run into problems solving claims before, but rather than being due to their own speed, this has been down to the greed of bike shops where riders choose to repair or replace their parts.

“We had cases where the bike shop tried to massively upsell,” says Taupitz.

“We told the claimant they can’t expect their fellow cyclists to pay for an upgrade just because a local bike shop has a spare part sitting around and wants to make a nice margin.”

Since then, Laka has partnered with several bike shops to make the claim process smoother and save on costs, but several shops have found it hard to get their head around Laka’s business model.

“Another really exciting moment was when we called a bike shop to ask them why the amount they quoted us seemed quite high.

“We told them about the Laka model and how if they charged more, our customers have to pay more, and you could hear them whispering in the background ‘that’s not how insurance works’.”

A major pivot to come

If the numbers are anything to go by, Laka’s proposition is clearly chiming well with customers, with Taupitz claiming the start-up has grown by 30% month-on-month since the start of 2019.

Next steps for the start-up include moving into areas of Europe with a high volume of cycling enthusiasts.

Having looked at bike sale statistics, which Taupitz says are widely available, Laka has identified the biggest opportunities to be found “between the Nordics, the Benelux region and the German-speaking countries”.

But he says there is also “no doubt” that Laka will move into other insurance product lines in the future, with personal accident cover the closest to being released due to customer demand for it.

Taupitz is clearly buzzing with ideas for the industry to add value to customers by integrating different services into the Laka proposition — like bike insurers selling cycling holidays, or adding insurance for surfers.

But one initiative set to be revealed later this year is more than a sidestep, and more of a giant leap.

He explains: “Because our business model is cash-flow negative, meaning we pay out first and collect money later, we don’t have the ability to generate interest from investing it.

“By doing this, Laka has accidentally created the most Sharia-compliant insurance proposition — Takaful insurance.

“You will see some news coming out soon as we’re aiming to launch a full Takaful proposition in Malaysia in the fourth quarter of this year.

“Malaysia and Indonesia together have the two most relevant markets for Islamic finance products — we have all of the ingredients to do a first test run, including a team of three sitting in Malaysia.

“This could dwarf anything we’re doing in the UK if it takes off.”

Cycling will be a starting point for Laka in the region, but according to Taupitz, critical illness and dental cover are two key areas the start-up wants to break into.