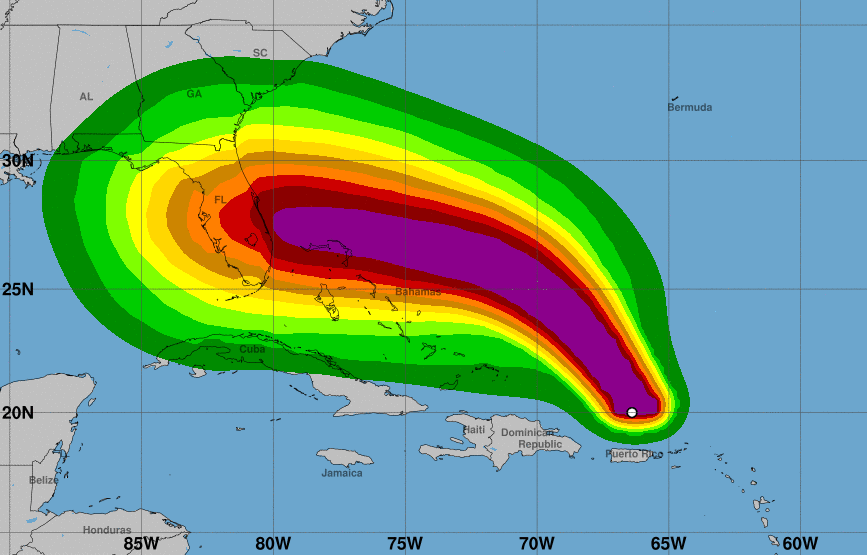 Last week it was predicted that Dorian would hit Florida over Labor Day Weekend (Credit: NOAA)

With a strengthening Hurricane Dorian clearing Puerto Rico and heading for the US state of Florida, two major insurance companies have issued warnings related to the travel and flood coverage in place.

The Woodlands Insurance Company, a Texas-based flood cover provider has urged state residents to make sure they have an appropriate insurance policy in place should the next “inevitable” disaster cause water damage to their properties.

This despite there being no mention of threat posed to the state, with the latest intelligence suggesting Hurricane Dorian will make landfall in Florida.

Gordy Bunch, founder of The Woodlands Insurance Company, said: “We are working tirelessly to prepare our communities for the inevitable and encourage everyone to contact their insurance agents to ensure they have flood coverage.

“Our area has suffered three major flooding events in the past two years, beginning with the Tax Day and Memorial Day floods in 2016, and followed up by the historic Hurricane Harvey in 2017.

“In responding to these tremendous events, it was disheartening to see so many people affected without coverage.

“Hurricane Harvey is second to Hurricane Katrina on the total losses paid out from the National Flood Insurance Program. Hurricane Ike (2008) and Tropical Storm Allison (2001) are included on the top 10 most significant flood losses, this highlights the need for Texas homeowners to obtain flood insurance.”

Travel insurance aggregator InsureMyTrip has warned travellers they’ll be unable to purchase traditional insurance to cover any type of loss incurred due to Dorian.

The firm also announced that travellers should expect delays on their insurance claims, as Dorian and the additional threat of Tropical Depression Erin creates a high-risk of flight delays and cancellations.

“Florida is a hub for both domestic and international travel. Airlines for America has forecasted a record-breaking 17.5 million passengers expected to fly over the long weekend, and Hurricane Dorian may cause significant delays.

“With an upsurge in claims submissions, travellers should anticipate delays.”

What’s the threat to Florida?

Dorian is expected to make landfall in Florida over the Labor Day holiday, which begins on September 2.

The US National Hurricane Center has warned of a high likelihood the tropical storm could strengthen as it approaches the state, reaching category 3 status — two ranks below 2018’s Hurricane Michael, which cost $5.53 billion in insurance claims.

“Dorian is forecast to strengthen and become a powerful hurricane during the next few days over the Atlantic waters,” the Center said on Wednesday afternoon.

Florida’s Governor Ron DeSantis called a state of emergency yesterday in preparation for the storm.

“Every Florida resident should have seven days of supplies, including food, water and medicine, and should have a plan in case of disaster,” he said.

“I will continue to monitor Hurricane Dorian closely with emergency management officials. The state stands ready to support all counties along the coast as they prepare.”