After a career in the insurance industry that includes being CEO of two large insurance firms, Mark Wood is steering HomeServe's LeakBot into new markets 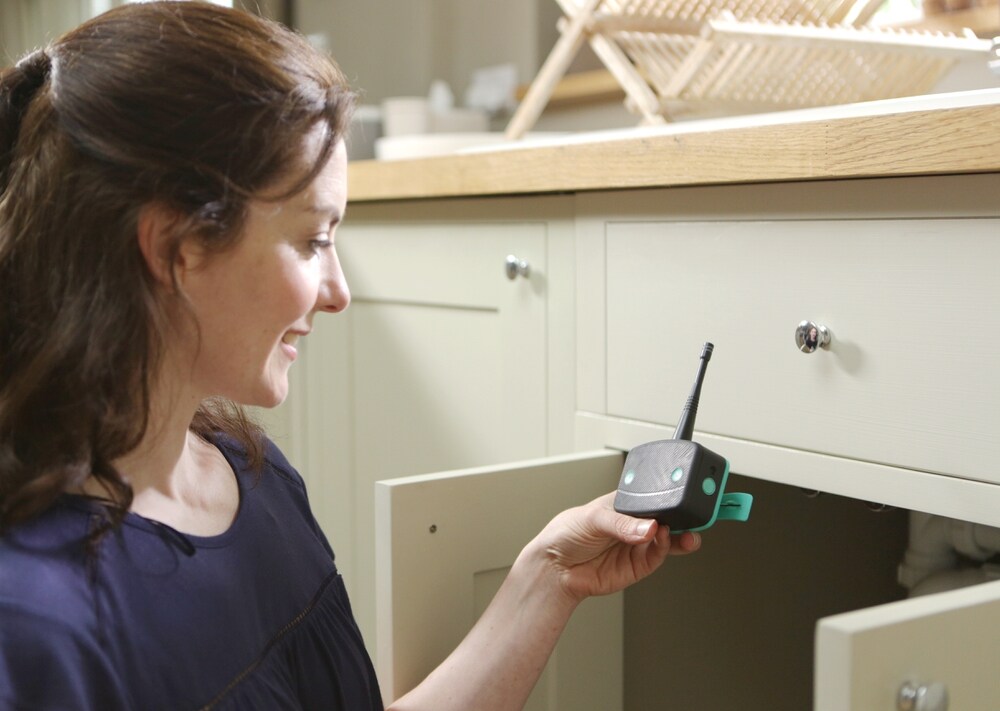 LeakBot about to be attached (Credit: HomeServe Labs)

The escape of water crisis is a global issue, frequently appearing in the top three most common claims made under a home insurance policy for the majority of firms, regardless of where they operate.

Along with the ABI’s report was a call to make such claims the number one priority among insurers.

HomeServe Labs’ LeakBot predates the call to action, launching in 2016 and establishing itself in the market over the next few years.

But with industry veteran Mark Wood on board, the firm hopes to push its leak-detecting robot into new markets abroad.

He says: “I’ve been following the movements of HomeServe Labs and the development of LeakBot for quite a while – the team are renowned within the insurtech space for their innovation.

“Perhaps the most exciting aspect of the company is the fact it has developed a scalable solution to a global problem.

“One of the major causes of insurance claims across the world is escape of water.

“If you think about the proportion of household claims that relate to this, the figures are huge.

“We recently released figures based on real-life data from LeakBot that revealed 43% of domestic properties in the UK have suffered water leaks.”

The start-up culture at HomeServe Labs

HomeServe Labs was branded a start-up in the early days despite its parent company being the UK’s largest home emergency assistance firm.

This isn’t surprising though, considering the small team was placed away from the main business in a creative hub affectionately referred to as “The Shed”.

Mark believes the start-up approach is still alive and well in HomeServe Labs, and credits it with the success the company has enjoyed so far.

“Part of the trick of making large organisations work well is cultivating agile, responsive and ambitious environments – which are often the characteristics of smaller start-up cultures.

“Some of the best corporations in the world have become so successful because of this – if we think of the big tech giants, a large part of their success is a result of the way they’ve managed to nurture a creative, youthful and energetic environment.

“HomeServe Labs combines the best of both worlds – although part of HomeServe, a large, successful organisation – HomeServe Labs or LeakBot as an innovation arm fosters the fast-moving and agile culture that typically characterises smaller start-ups.

Ease of use is a major feature of smart technology that gains success in the insurance industry nowadays, with customers consistently demanding simplicity in the face of complex problems like home security, fire and escape of water.

There’s no shortage of insurtech start-ups vying for investment to get their ideas off the ground but, having now reached scale-up stage, it’s clear that access to the pool of maintenance staff from HomeServe Lab’s parent company is in large part responsible for LeakBot’s success.

Acknowledging this fact, Mark says: “A customer only needs to clip the device onto the rising main by the stopcock.

“The LeakBot app then alerts customers to any leaks, and HomeServe Labs will immediately deploy a plumber equipped with patented technology to help detect the precise location of the leak needing to be fixed.

“The level of sensitivity and refinement within this technology is genuinely better than any competitor offerings.

“But the main advantage for insurers is that LeakBot not only detects water leaks, but offers an end-to-end service that monitors, detects and finally resolves any issues.

“Only we are offering a full end-to-end escape of water claims mitigation service to insurers, which we see as a huge advantage in the market.”

Internet of things (IoT) technology – that is, any device that connects to the internet in order to communicate with other objects – is transforming the claims landscape of insurers.

“We’re in the very early stages in terms of the application of digital technology to domestic appliances, however, LeakBot has the potential of being an application on a platform that integrates many different aspects of smart home technology,” he says.

“This could include home security, environmental efficiency, heating, lighting and entertainment systems.

“LeakBot lends itself well to home-controlled platforms that we may soon start to see becoming the norm.”

LeakBot made its 2016 debut in the UK when it was taken up by the country’s largest insurance company – Aviva.

Since then, HomeServe Labs has expanded the product’s reach into Europe through partnerships with insurers in Holland and Denmark.

Mark believes his role as chairman going forward will be in the strategic growth of HomeServe Labs into new markets, something he’s confident his experience in the industry will help with.

“The great thing about HomeServe Labs is that the company has developed a great product and has some tremendously talented people involved in the business, with a strong management team already in place.

“The company has the direction, ambition and talent it needs to work towards a bright future, expanding internationally and becoming a viable end-to-end claims mitigation solution for insurers across the globe – starting, of course, with the UK and now Denmark.

“This is where I plan to apply my skills – helping to scale and grow the business into new markets, applying my expertise from the insurance sector to help drive the company even further forward.”