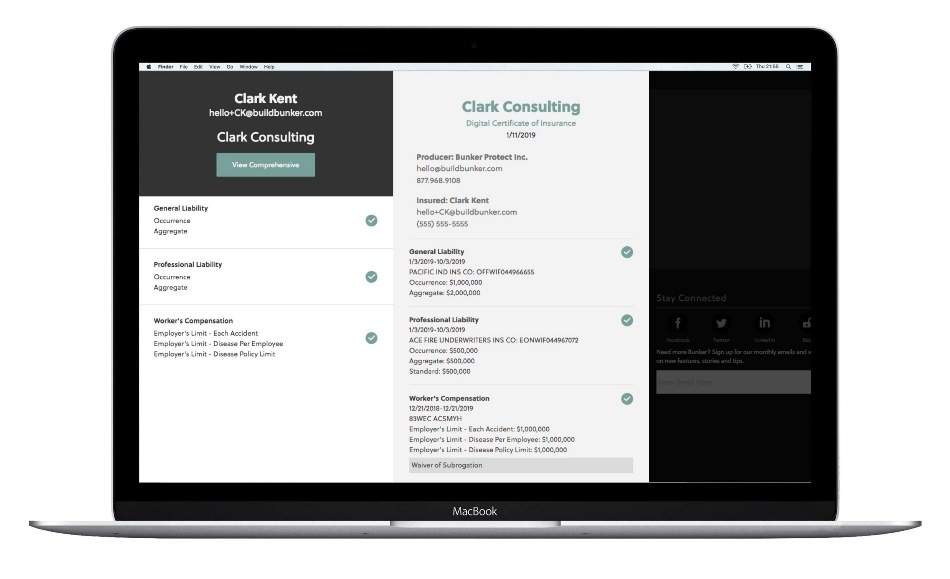 Bunker claims that until now, COIs mostly came in the form of PDF documents, which are hard to track, are easy to fabricate and the data was static.

The new live COIs from Bunker are stated to notify the certificate holder when a contractor’s policy has changed, cancelled or expired.

Member companies can also build their insurance requirements in the Bunker platform, share them with their contractors and track whether or not the requirements have been met from their Compliance Dashboard. This can be done on large scales, the insurtech stated.

The Bunker Live COI are claimed to make it possible for the future of work to be agile and innovative without sacrificing protection.

Bunker CEO and co-founder Chad Nitschke said: “One of our team members coined the phrase, the future of work is tomorrow at 8am, and it’s true. The future of work is here, but the insurance industry is still operating on centuries old processes. Bunker has helped thousands of freelancers, gig workers, contractors and small businesses with insurance that’s compatible with the new way of work, and we’re continuing to invest in technology that makes it as frictionless as possible.

“The Bunker Live COI is another key step in accomplishing this, and transforming the centuries old insurance industry.”

The platform could make it easy for independent contractors and small businesses to update their Live COI and share instantly with unlimited certificate holders. Earlier the process was slow and full of friction and it sometimes resulted in errors or even fraud.

A common type of insurance fraud is failing to add an Additional Insured, a problem which could be solved by making it free and easy to do correctly.

As per the firm, by bringing speed and transparency to both sides of the contract, business relationships can take off in the right path and stay protected throughout.

YOSS CEO Marcus Sawyerr said: “We really appreciate that Bunker have taken a fresh approach to solving a significant challenge, ensuring protection for independent talent is vital for a compliant and protected workforce.

“At YOSS we believe instant insurance and the Live COI are truly a game-changer for the collaboration with the enterprise. This initiative will ultimately create compliant economic opportunity across the entire ecosystem.”